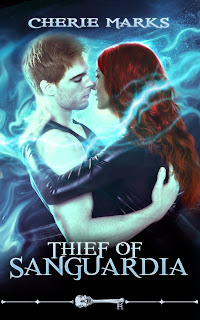 
His otherworldly charm isn’t an act.


Kaia Skipwith is having a very bad Monday. A reformed thief who has to pull one last job in New York City to save her sister, she must bring some barely-guarded, ancient artifact to the Seagate Building in Manhattan by midnight Saturday, or she’ll never see her sister again. An in-the-bag finale for an experienced B&E expert such as herself. Yet, not more than five minutes into the job, alarms blare and car tires screech up. She grabs the creepy key with a skeleton emblem—a literal skeleton key—looks up at the door that appears in front of her and gets the strangest feeling she’ll be safe on the other side of that door.


Zegorie Fay of Clan Montgomerie has taken charge of the Vampire Army, and though he knows his duty, he no longer knows why he fights. War has been raging in Sanguardia for as long as he can remember. Battle-worn and searching for meaning in his existence, he gets distracted in a most unusual way. The minute he sees her, he knows she’s trouble. For one, she’s the most attractive female he’s ever seen. For another, she’s clearly human, enemy to the vampires and bringers of war. But, above all, he senses something special about her, something…otherworldly. He must possess her secrets.
Excerpt:

“I know you are hungry, Kaia. It’s not poisoned, which is why I took the first bite. I was attempting to show you it was safe to eat.”


He held it out to her again, and with just the slightest hesitation, she flexed toward him and allowed him to feed her, his fingers lingering over her lips before pulling back to get another bite. She moaned as the taste rolled over her tongue. A mixture of savory meat and something like cinnamon filled her mouth, and she chewed hungrily. In the dim light, he looked pleased, with his lips tipped up at the corners, but she didn’t miss his eyes shining with desire. She needed to be cautious with her own reactions so that he didn’t get the wrong idea.


Again, he offered her a bite with his fingers, and she took it, trying to be careful not to get carried away. The strangest temptation to grab his hand and hold it to her mouth while sucking his fingers slipped into her mind, and she barely resisted acting on such a wild thought. Something was seriously wrong with her.


With the next offering, when she tilted toward him, he pulled the food back from her mouth before she could get the bite, and in a tight voice asked, “The armory is guarded on all sides and impossible to get into. How did you get your hands on that cleaner, Kaia?”


She closed her mouth and shrugged her shoulders. It wasn’t the only weapon she was packing, and from the way the handgun still weighed down her hidden holster, they hadn’t taken it from her yet. With a cross of her arms, she explained, “I told you, it’s what I do. I’m a thief. I haven’t come across a place that can keep me out.”


He eased the food toward her again, and she took it from his fingers once more, holding his gaze this time as she took her time and licked the juices from his fingers. She pulled back, but his hand seemed locked in place as he continued to stare at her, a look of utter lust in his unblinking scowl. She didn’t know if he’d liked the touch of her tongue exactly, but if the bulge in his pants were any indication, he hadn’t been immune to it.