Thief of Sanguardia is Coming Soon! 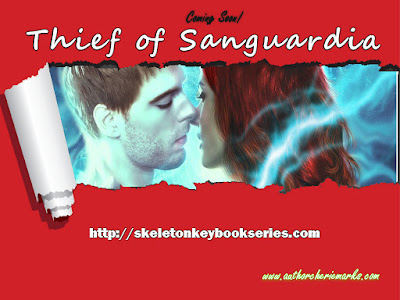 Kaia Skipwith is having a very bad Monday.  She’s a reformed thief who has to pull one last job in New York City in order to save her sister.  If she doesn’t bring some barely-guarded, ancient artifact to the Seagate Building in Manhattan by midnight Saturday night, she’ll never see her sister again.  Should be an in-the-bag finale for an experienced B&E expert such as herself.  Yet, not more than five minutes into the job, alarms blare and police cars screech up, making it look like a complete set-up.  Without much thought, she grabs the artifact, noticing it’s some kind of creepy key with a skeleton emblem.  A literal skeleton key. She looks up at the doors in front of her, shaking her head in doubt.  She could’ve sworn there’d only been three doors in front of her just moments ago.  The fourth seemed to pull her toward it though, and as she hears the officers storm through the entrance below, she gets the strangest feeling that she’ll be safe on the other side of that door.

Zegorie Fay of Clan Montgomerie has recently inherited the charge of the battalion to which he belongs in the Vampire Army, and though he knows his duty, he no longer knows why he fights.  War has been raging in Sanguardia for as long as he can remember.  He’s battle-worn and searching for meaning in his existence, which is surely the reason he gets distracted looking for the female who falls from the sky into the lake beside the encampment where they await the General’s next orders.  No one else seems to have noticed this strange sight, so he gives a few orders that gets the camp busy and begins his own scouting mission.  The minute he sees her, he knows she’s trouble.  For one, she’s an attractive female.  For another, she’s one of the human race, which are enemy to the vampires and the bringers of the war.  But, above all, he senses there is something special about her, something…otherworldly.  He must possess her secrets.
Posted by Cherie Marks at 5:29 PM