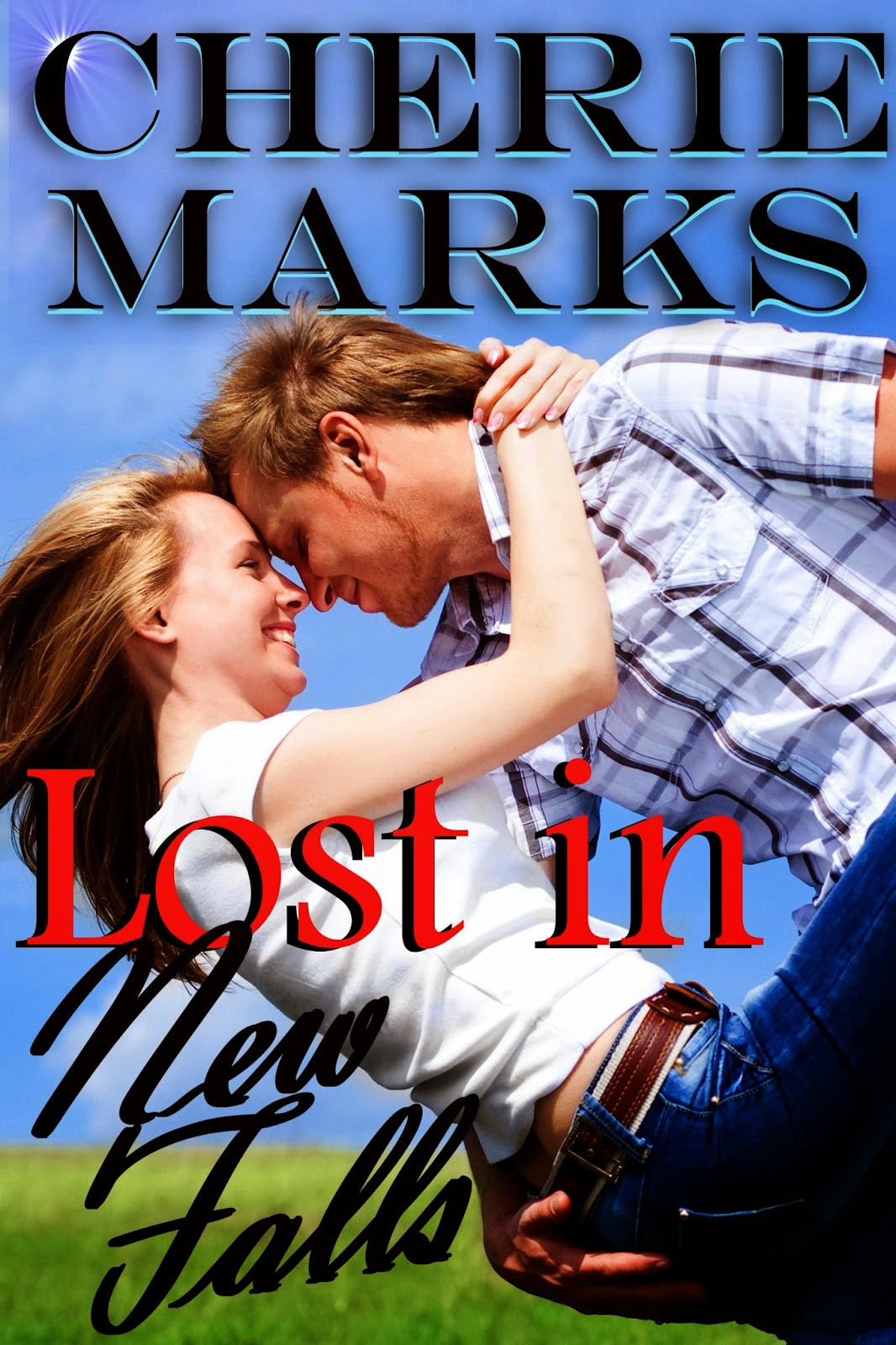 Let's cut to the chase.  Here's a look inside the Small-Town Contemporary Romance, Lost in New Falls.

Over…so over. Her life was over. Her career was over. As the sheriff’s deputies tromped around the little cabin her grandfather deeded to her last year, they catalogued missing items, but all Kate Delaney could focus on was the one major electronic that was everything to her—her laptop. She wasn’t sure how she’d managed to swallow a barbell, but it felt like one was lodged in her chest. It was gone, along with all she’d written over the years. Her articles and essays, short stories and even a novel, but the one that hurt the most was her newly-finished, just-edited, ready-to-send screenplay. She’d finished it two weeks ahead of her deadline, and it was the one. Not like every other piece she had written, this one would cement her name in the Hollywood community. Just one problem—along with her laptop, jewelry, MP3 player, a vase of flowers, and various other things, some infernal criminal had made off with it.

“Did you notice anything missing from the bedroom, Ms. Delaney?”

She unfolded her hands and lowered them from her mouth and nodded. She cleared her throat and bit her lip. It was a tad embarrassing. “An alarm clock, a pillow, and…uh, well, whoever it was, cleared out my underwear drawer.”

“You had valuables hidden there?”

If only. She took a deep breath, but the breath caught in her throat at the sight of the hulking man as he stepped through her door, one shoulder at a time. Anybody but him. Her heart began to pound. Quentin Taylor’s badge glinted on his shirt as he nodded to a few men in her kitchen, then he sauntered over to her and the young deputy standing beside her. His looks had grown more devastating over the past ten years, and she had to tell him exactly what the thief had taken out of her underwear drawer. Whoever it was ran away with her silky lingerie, leaving her with only the bra and panties she currently wore. What in the world would a thief want with her skivvies? It was just a tad creepy, to say the least.

As he stopped before them, planting his hands on his hips and moved his gaze from Deputy Johnson to her, no light of recognition glowed, and she was almost relieved. Maybe he wouldn’t remember her. Sure, New Falls, Tennessee was as small a town as they came, but she had changed considerably over the ten years she’d been away. Considerably.

His deep voice rolled over her like a beam of sun magnified through a window, and her abdomen twisted and fluttered with all the old nerves he’d inspired in her when she was a little younger. It really wasn’t fair that he still had all his light brown hair, smooth tanned skin, and a broad chest that narrowed to a lean waist. Was it too much to ask for him to have a pot belly, a receding hairline, anything that would make this humiliation less…well, humiliating? Instead, he looked the same. No, he looked even more gorgeous, and though it stung he didn’t recognize her, it would be best for all if he never remembered her and that night so long ago.

Of course, the odds were in her favor. Where he’d remained pretty much the same, she’d changed—really changed. Back in high school, she’d been the funny, chubby girl—everyone’s friend, but no one’s girlfriend. She’d grown up here, so she’d played her role, not realizing another option was possible, but the minute the chance arrived, she left and reinvented herself. She’d gone to California, attended USC in Los Angeles, began eating better and exercising until she’d lost fifty pounds. And although she was far from rail-thin, she felt confident in her looks. At least until Quentin sauntered into her little writing cabin.

“Well, Sheriff, someone waited until Ms. Delaney exited the premises and broke inside, taking various items that she’s currently listing for me. She was just going over the bedroom items. You were saying about your underwear drawer?”

She could feel her cheeks heat, and she had a sudden nervous urge to reach for something unhealthy but oh-so-tasty. She’d left emotional eating behind long ago though, so instead, she inhaled deeply and answered, “No valuables missing from the drawer, just the,” she cleared her throat again, “contents.”

Both men went still, their faces frozen, mouths open and for the briefest of moments, Quentin’s gaze roamed down her body and back up, lingering in a couple places. She could almost revel in that until she recalled it was Quentin.

“You mean they took your underwear?”

She sighed and rolled her eyes. “Do I have to spell it out for you? Panties, bras, and other lingerie all gone.”

Their looks were laughable, but she just wasn’t in the mood to yuk it up when someone out there had her life’s work in his or her grubby hands, and her desperation to get it back ate at her just enough, she was willing to work with Quentin. Once they closed their mouths, both suddenly became very interested in the report in the deputy’s hands. She had the irritating urge to roll her eyes and stomp her foot. This was getting them nowhere.

“Kate Delaney? Your name is Kate?”

He studied her again, disbelief apparent in his golden-flecked green eyes. If he was waiting for her to confirm they knew each other, they’d be standing here until the cedar smell wore off the log walls around them. She wasn’t saying anything.

“You can’t be the Katie Delaney I know.”

Oh, she most certainly was, but some dark part of her wanted to hear him say why she couldn’t be the same girl. Was she too thin? Would he even go there?

She put it out there to see what he’d do with it. “One and the same.”

“Wow! Look at you! You look amazing.” Okay, so maybe it wasn’t so bad he recognized her, but appreciation for the moment couldn’t be enjoyed properly since her world was currently flipped upside down.

“Thanks. I guess I’ve changed.” She knew she had, and he could put his tongue back in his mouth any time now.

He seemed to gather himself and ran a hand over the back of his neck. Yeah, he definitely remembered her. “Kate, you look amazing.”

“You said that already.” The awkwardness grew, and as much as his uncomfortable clumsiness made her smile, this wasn’t going to help her get her laptop back. She had to get the focus back on the problem at hand. “So, what’s the plan to find my stuff?”

He stared at her for a few more minutes before shaking his head and glancing back over the report. “We’ll investigate our usual places, and there’s always a chance in this small of a town, we’ll recover some of your stuff. But, the bad news is, it will take some time.”

She pulled a hair tie from the pocket of her jeans and began to smooth her hair off her face, quickly pulling it off her neck in a high ponytail. “Look, I’ll be honest with you. Most of it is replaceable, and I couldn’t care less, but it is absolutely imperative you get one thing back for me. Without exception, I have to have my laptop.”

Great! What now? Could she replace her laptop and re-type the script in two weeks? Ha! As if. She scrubbed her eyes and resisted the hopelessness welling up and threatening to dissolve into all-out tears. It was a little much to absorb on top of her grandfather’s illness. When the doctor informed her of her grandfather’s condition, she’d flown to Tennessee the next day. Fortunately, the Spelling-type TV show she’d written for rolled tape for good. It hadn’t seemed like a blessing at the time, but it freed her up to come back to New Falls just when her grandfather needed her. Once she was here, she’d kept a low profile, and finishing her script helped to relieve the stress of watching her grandfather slip closer and closer to the end. Just this morning, she’d gone to the hospital, and he’d slept throughout her visit. They were managing his pain at this point with heavy drugs, so the moments were rare when she actually spoke with him. Now she was more stressed than ever.

They walked through the five rooms of the cabin until she didn’t notice anything else missing, and they had a tally of everything in her refrigerator, medicine cabinet, and closet. Quentin sent the deputies out and pulled her into the kitchen. His familiar spicy scent tickled her nose, and feelings she’d thought she’d suppressed years ago surfaced.

Arms crossed, backside leaning against the tiled countertop, he stared at her intensely, and she felt like a slice of decadent chocolate cake. Maybe that was just her former food-addiction speaking.

“It’s been a long time. Crazy circumstances. Last I heard, you ran off to California, never to be seen or heard from again.”

She shrugged. Had he wondered about her after she’d gone? Part of her thrilled at the idea, but before she got too excited, she reminded herself who was doing the wondering. “My grandfather’s not doing well. I feel horrible about it, but he’s been in a nursing home the past three months, getting worse each day. The doctors don’t think he’ll last the week. I keep trying to get a hold of Reese, but he doesn’t answer my calls.”

“I’m sorry to hear about Bowden.” Her grandfather had practically helped raise Quentin after his father left for good, so she knew his sympathy was sincere.

“How is your brother?”

“Your guess is as good as mine. I haven’t talked to him in six months or more.”

“He went up to Chicago or somewhere, didn’t he?”

He shifted his feet, bracing them apart meeting her gaze again. “You alright staying here by yourself?”

“It’s just Quentin. We go back too far for anything else.” She didn’t disagree but had no intention of getting on a first name basis with him ever again. He didn’t push the point. “Well, just to be on the safe side, for a couple nights at least, I’ll have one of my deputies drive up this way and check on you a couple times a day.”

“Don’t bother. Whoever it was took all the good stuff. I don’t have anything else valuable for a return visit. Besides, from the sounds of things, I won’t be staying in New Falls for long.”

One side of his mouth lifted slightly, causing a flutter to sway deep in her belly. “Do you think we’ll have time to catch up before you go?”

She didn’t know whether to laugh or freakin’ flip him off. Really? Did he really believe she wanted to catch up with the man she’d thrown herself at only to be completely rejected? Unless she caught some heretofore undiscovered crazy bug, she had no intention of catching up with Quentin Taylor, now or ever.

Fortunately, she wasn’t forced to decide because her cell phone vibrated with one of her favorite P!NK songs. She cringed as she glanced at the caller ID, which glowed with the number of her agent, Claire Strong. She hated to break bad news to people.