Ruth Cardello Is Back With Another Billionaire! 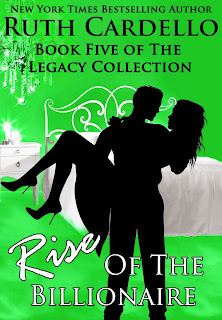 Ruth Cardello, NYT's Bestselling Author of Maid for the Billionaire and For Love or Legacy,
has a new release coming on May 20th, and fans are beyond ecstatic.


Rise of the Billionaire

Dreaming of Alethea gave Jeremy Kater the strength to survive a difficult childhood. Now that he has influential friends who owe him big favors, he's determined to become the kind of man Alethea would be interested in - rich and dangerous. Jeisa Borreto was hired to help Jeremy morph into that man. It's a job she would enjoy, if it weren’t tearing her heart to pieces.

How do you help someone change, when you already love who they are?

Hint: Sleeping with them doesn't help.

Excerpt:
He paused and shook his head. Jeisa slid beneath one of his arms again to help steady him.  The heat from his body spread like a wildfire through her own. Jeremy was all man now and everywhere their bodies touched, Jeisa felt just how much he’d changed.  The strong arm draped across her shoulders no longer felt like it belonged to a man who spent his life behind a computer. Boxing was only a small piece of Jeremy’s plan to physically transform himself.  He’d started running and lifting weights very soon after they’d met.  Jeisa hadn’t thought it was necessary… But oh, the results were nice.

He stumbled as they walked. Her hand flew up to steady him, coming to a rest in the middle of his hard chest and she felt him catch his breath.

Is he thinking what I’m thinking?
No, no, no, she thought frantically.
Unlike me, Jeremy has always been painfully honest.
Remember that he’s doing all of this to win the heart of a woman.
Another woman.
As in, not me.

Her body didn’t care. She looked past the swelling and the blood and all she could see were his beautiful, sexy blue eyes. They paused for what seemed an eternity and she couldn’t look away.

What would it be like to be loved by a man who is willing to do anything to win your heart?
You could be yourself with such a man.
Love like that doesn’t follow the rules.
It is sweaty, and passionate, and the stuff that romances are made of.

An odd expression entered Jeremy’s eyes and he straightened away from her, breaking contact.

“Yes,” she said, and mentally kicked herself for allowing the lines between employer and friend to blur.  She was part of Jeremy’s life.

Just not in the way she wanted to be.

I love this book by Ruth Cardello. Great series. <3 Andrea

This is book 5 of the series. The series starts with Maid for the Billionaire. AWESOME series. ENJOY