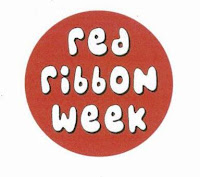 Red Ribbon Week began in honor of the memory of Kiki Camareno, a man who dedicated his life's work to fighting the drug trade in Mexico and the United States.  Unfortunately, he was murdered for his convictions, but thanks to his efforts, now kids are more aware than ever how dangerous drugs can be.

The truth is, kids still get involved with drugs, addiction still ruins lives.  I know because I see it in the students I teach.  I see it in my own brother.  Plain and simple, addiction is a preventable disease, and though I'd like to think we wouldn't forget what we've learned from our past if we didn't have reminders like Red Ribbon Week, the reality is history shows we often repeat the same mistakes when we don't remember.

What I wouldn't give to be able to go back and show my young brother how his life was going to turn out.  Maybe, just maybe, that would have been enough to make him stop and think.  Every year, I use his experience as a warning to students, but I know some of them still believe that won't happen to me.  But the reality is, my brother didn't take that first hit with his heart set on becoming addicted.  He just wanted to have a good time.  Yeah, he stopped having a good time a long time ago.

Thank you to those who still uphold anniversaries like Red Ribbon Week.  Here's hoping it saves lives that would have otherwise been lost to drugs.

Email ThisBlogThis!Share to TwitterShare to FacebookShare to Pinterest
Labels: red ribbon week, say no to drugs

I understand how you feel. My sister is addicted to drugs and yeah, she stopped having fun long ago. Thanks for posting this. I shared.