In honor of the nuptials:

Happy Writing!
Posted by Cherie Marks at 5:12 AM No comments:

The Wild Rose Press is blowing out five candles today.  Congratulations to all the people who've made this e-publisher a success, and I'm kinda proud to be a small part of it.

Join the celebration by going to one of the following links:

Happy Writing!
Posted by Cherie Marks at 5:41 PM No comments:

Email ThisBlogThis!Share to TwitterShare to FacebookShare to Pinterest
Labels: The Wild Rose Press

As I mentioned in a previous post, I am taking an online course all about self-editing with Angela James of Carina Press.  Many of her posts are insightful and thought-provoking, to say the least, but one idea has been mullin' around in my brain since I read about it on Saturday (playing catch up).

Ms. James brought up a writer's tendency to repeat character actions.  For instance, do your character shrug their shoulders (what else are they going to shrug?) all the time or raise their eyebrows, right and left in the story?  I caught a few instances of that in my short story Into the Fire, but I'm sure I have certain "writer's tics" as Angela James calls them.

But for me, it brought up a point I've wondered about.  Two authors, who I highly respect, use a particular action in every book.  At some point in one author's books, the hero and heroine will kiss so passionately, their teeth will bang together, and in the other author's books, the heroine's heart will "pinch" with feeling at some time in the story.  So, my question is this:  is this repetition on purpose?  Is it a "writer's tic?"  Or is it something like a trademark?

I don't have the answers, but to be honest with you, I always look for that action and get a little excited when I find it, so I'm not saying it's a bad thing.  I have to admit I was thrown off a little at first when the action popped up in another book by the author, but I wasn't disappointed in the author's lack of variety.  Matter of fact, the strange thing was, I felt a certain kinship with the author, like there was a secret between the author and her regular readers.

So, IMHO, repetition of actions isn't always that bad, if done in the right way.  What do you think?

Six sentences from my freshly edited short, Into the Fire:


And what was worse, he didn’t even seem to know she was in the room.
The last time Shyann had seen Luke Tracy, it’d been raining, he’d been naked, juggling his clothes, and she’d been pushing him out her door for what she’d hoped was the last time.  She’d spent the last month and a half in California wine country, researching an article and creatively avoiding him.  Now, they were competitors on a nationally aired television cooking show.  Vengeance was hers with a win.  And though they say revenge is best served cold, their relationship hadn’t been on ice long enough to chill her anger yet.
Check out other Six Sentence Sunday contributors at http://sixsunday.blogspot.com/
Happy Writing!
*Next week, I might even make it on the official list.  If I can remember to follow the directions.
Posted by Cherie Marks at 5:29 AM No comments:

Currently, I'm spending all my oodles of spare time (cue sarcasm) doing writerly things, one of which is taking an online editing course with Angela James of Carina Press.  I will say that much of what she is covering, I am aware of (Yes, I just ended with a preposition.  What you going to do about it, grammar police?)  But she has shown me an insight that had often escaped me--what goes through an editor's mind when looking at a manuscript.  Yes, I'd heard certain ideas bandied about as to what editor's were really thinking and looking for in a story, but Ms. James has brought up things I never would have imagined.  Anyway, I'll share some, but I can't really outline her whole course because she has the intention of publishing a book all about it.  But, I thought I'd repost this veeeery funny clip about a very horrible editor.

I originally posted it at my other blog:  http://www.sherrycahill.blogspot.com/
Check it out if you'd like.

Happy Writing!
Posted by Cherie Marks at 7:47 PM No comments:

Two blurbs:  The original that I sent in my query letters, and TWRP's blurb committee's version.  Tell me what you think.

Months after a devastating break-up, Shyann and Luke meet again under sizzling circumstances.   Head-to-head on a televised cooking competition called, KITCHEN TWIST, to see who can serve up the best date-night fare, each arrives with a different motive.  Luke has every intention of winning back Shyann’s heart, even as she is determined to get closure on the not-so-tasty heartbreak he served up by stealing her affection and her executive chef position.
Luke knows every culinary masterpiece requires a delicate touch, but all that knowledge is thrown out with the leftovers as he tries to make Shyann see he’s not as bad a guy as she believes.  Now he pushes both of them to the limits to win the competition that will satisfy a bet in which she agreed to leave with him if he succeeds.  But putting these two within the same vicinity results in an out-of-control blaze that two top chefs such as them can’t possibly resist, and even without winning, Luke convinces Shyann of his love and devotion, resulting in a sensational blend of two people who were meant to be together.
Final version:

Months after he stole her affections—then her executive chef position—Shyann and Luke meet again under sizzling circumstances, competing head-to-head on a televised cooking show called Kitchen Twist. Each arrives with a motive: Luke intends to win back Shyann’s heart, even as she wants closure on the not-so-tasty heartbreak he once served up.
Luke knows culinary masterpieces require a delicate touch, but that knowledge is tossed out with the leftovers as he works to show Shyann he’s not such a bad guy.  Now he pushes his skills to the limit to win the competition and satisfy a bet.
Can two top chefs resist each other as they move out of the pan and into the fire?
WOW!  I love the final version.  It's so streamlined, but gets all the most important ideas.  Love it!
Happy Writing.
Posted by Cherie Marks at 6:46 PM No comments:

Email ThisBlogThis!Share to TwitterShare to FacebookShare to Pinterest
Labels: Into the Fire, Make It Better Monday

Need a little cool down?  You might after this Ladies' Night pic.
Posted by Cherie Marks at 4:41 PM 1 comment:

I'm in full-on editing mode, so My Wow Me Wednesday is a video that many I know can relate to.  Enjoy!

Happy Writing!
Posted by Cherie Marks at 5:58 PM No comments:

Email ThisBlogThis!Share to TwitterShare to FacebookShare to Pinterest
Labels: Blogging, Wow Me Wednesday

For Make It Better Monday this week, I'm going to post an early draft of the first paragraph of Into the Fire, my short story soon to be published with http://www.thewildrosepress.com/.  I am currently taking an online course with Angela James, executive editor with Carina Press, and I'm all about editing lately.  So, don't be afraid to tell me what you think.

A little heat-ray vision would be so perfect right about now.  Shyann Devere crossed her arms and glared.  The man sitting to the right of her five feet away, legs sprawled, soduku puzzle book in hand looked like he didn’t have a care in the world.  She imagined hot beams burning from her eyes in his direction.  But barring any sudden toxic waste incidents or radioactive insect encounters, she’d just have to be satisfied with her ordinary angry gaze.  One dilemma though.  She had no intention of actually looking directly at him, so an out-of-the-corner eye stare didn’t have quite the burn-him-to-ash she was going for.  And what was worse, he didn’t even seem to know she was in the room.

Heat-ray vision would be so perfect right about now.  Shyann Devere crossed her arms and glared.  The man sitting five feet to the right of her, legs sprawled, Sudoku puzzle book in hand, looked like he didn’t have a care in the world.  She imagined hot beams burning from her eyes, searing him to cinders.  But barring any sudden toxic waste incidents or radioactive insect encounters, she’d just have to be satisfied with her disappointingly un-super-powered, but über-angry gaze.  There was one dilemma, though.  She had no intention of actually looking directly at him, but an out-of-the-corner-of-her-eye stare didn’t have quite the burn-him-to-ash punch she was going for.  And what was worse, he didn’t even seem to know she was in the room.

The changes aren't tremendous, but they make a difference in how the paragraph reads and the image created.  Do you see anything else that could be better?  What's good about it?  What's still not quite there?

Doesn't he look like he could use a little TLC?  Who's first in line to help him out?
Posted by Cherie Marks at 9:41 PM 1 comment:

Middle of the week, hump day (as in get over, people.  What were you thinking?), Wednesday comes but once a week.  So, why don't we laugh a little and make the day that much better.

If you haven't yet, you should check out http://damnyouautocorrect.com/.  I was laughing so hard, out loud, tears were coming down my face.  Most are inappropriate for children, so wait for some alone time, but these are hilarious. 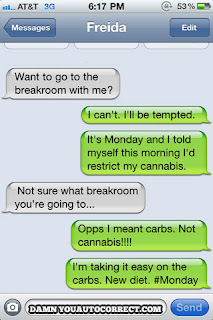 Not usually a fan of the drug humor, but...
Happy Writing (and laughing)!
Posted by Cherie Marks at 8:04 AM No comments:

Truth is, I don't have a line to make better this week because today couldn't get much better. I found out that INTO THE FIRE, my short story/novella I signed a contract to publish just last month finaled in Passionate Ink's Stroke of Midnight contest!

I actually delayed signing the contract to check whether or not I should pull it from the contest, but ultimately signed because the contest cooridinator explained the story was still eligible because it was uncontracted when I entered it back in early February.

Now it goes in front of an e-pub editor to see if it places. I feel very blessed lately!

Ryan Kwanten of True Blood in his natural habitat.
Posted by Cherie Marks at 7:39 AM 1 comment: